Over half a million dollars (ETH 3,990 worth over USD 590,000) was spent as a transaction fee in sending approximately ETH 0.17 ETH – a mere USD 25 worth as at press time. The transactions did take place in a series of 5 transfers from a currently unknown wallet address to 3 different wallet addresses, each […]

Fudan University in China has decided to setup a blockchain research center in Shanghai. The said university is one of the top-ranked institutes in the country. According to the announcement, Shanghai Zhongren Information Technology Co, Ltd and Zhongan Online Property Insurance Co, Ltd will collaborate with Fudan University in order to establish the Shanghai Blockchain […] 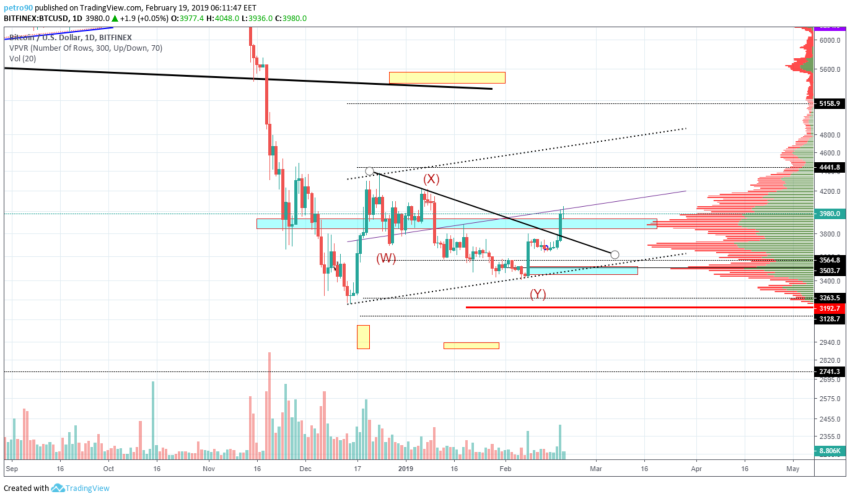 Buyers finally managed to start their game. Yesterday, on relatively large volumes, buyers broke through the upper trend line of sellers, which kept the price from 24 December. Now, buyers are trying to fix themselves over the price zone of $3,830-3,930. At the moment, finally, we can imagine and draw a new channel of price […]

Germany has recently consulted leading industrial groups and companies to become stakeholders in the country’s blockchain development projects. Reuters reported that some industry groups and companies have been requested to submit recommendations regarding blockchain technology in the upcoming weeks. The names of these companies have not been revealed yet. Reuters maintained that although the government is […]

Japan’s Amazon-analog Rakuten, in its last earnings report, has announced that it will be releasing new features on its pay mobile app which may supposedly allow its users make use of cryptocurrency transactions through the gateway in the near future. Rakuten didn’t directly say that it would accept cryptocurrencies, however, it did give a hint […]

A privately promoted city in Norway going by the ideals of Anarcho Capitalism has announced the development of its native cryptocurrency for local transactions. The city already has a blockchain-powered smart city platform facilitating its citizens and now its native cryptocurrency is also launched for good measure. Liberstad, the anarcho-capitalist utopian project in Norway is […]