South Korea on Edge Thanks to Crypto Bulls

South Korea state authorities are on high alert following the incredible run for Bitcoin price and the rest of the crypto market since April. Despite a general positivism throughout the industry during the rally, the government there has called a meeting to discuss the possible outcomes for current market conditions. First reported by local broadcaster […]

A week has passed since the previous analysis of BNB was published, but neither buyers nor sellers have yet managed to move the price to the critical points, which we wrote about earlier. After the buyers failed to break through the upper trend channel lines (global and local) for the first time, the sellers tried […]

IBM head of blockchain Jesse Lund has gone in an unexpected move but he says he’s still backing blockchain as a payment platform. Lund is noted for his prediction that Bitcoin will rocket over time to hit the USD 1 million mark, and appears to be backing that earlier enthusiasm having said that “I like […]

Bitcoin payments processor Bitpay’s chief commercial officer, Sonny Singh, has told Bloomberg TV that the current surprise bull run taking place in the crypto market is a direct result of growing interest coming from large businesses in the industry. And the interest, he believes, will only grow over the coming months, along with piling endorsements […]

A recent analysis of Bitcoin activity in 2018 has illustrated how major investment in the cryptocurrency increased over what has been now tagged as “Bitcoin Winter” through a surge over the period in new wallets holding between 1,000 and 10,000 bitcoins. Known as “Firm Size” wallets, these holdings of 20% bitcoin’s circulation increased almost 7% […]

Blockchain lender Bitbond has announced a new security token offering (STO) that it claims is the first such offering to be approved by a regulator in Germany. The platform hopes to raise EUR 3.5 million (USD 3.9 million) through the STO so it can expand on its business, which has a loan model aimed at […] 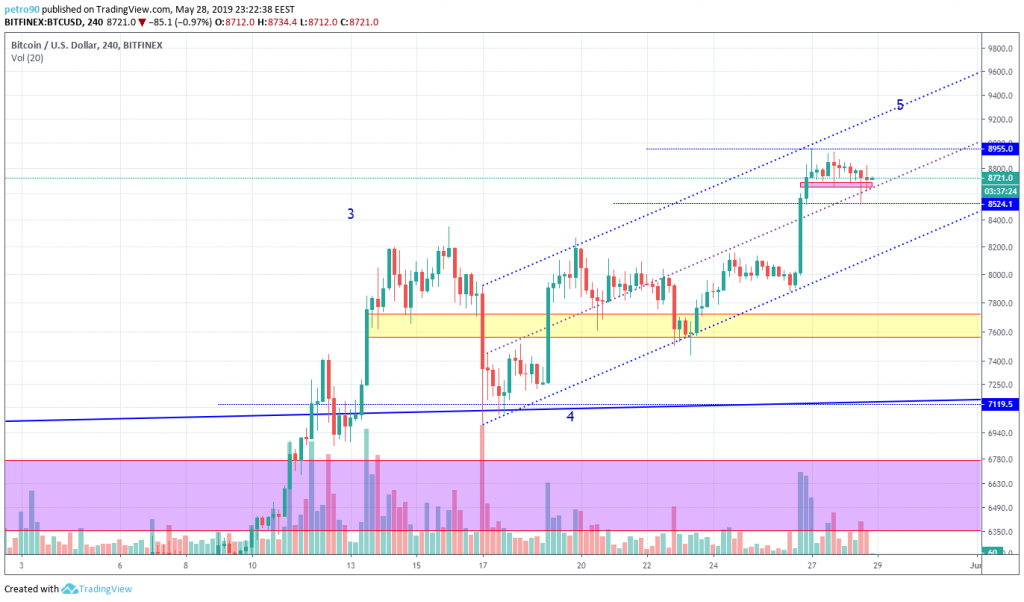 Interestingly, the close of last week’s candle broke the price of $8,200 without problems and updated the local high of Bitcoin. Buyers tried to break and fix above this price from 14 May. However, when they saw that sellers were weak and not trying to impose a counterattack, buyers passed $8,200 and started a new […]

Ted Livingston, CEO of Kik and founder of the Kin Foundation, has announced the launch of defendcrypto.org with a funding of USD 5 million to contend with the US Securities and Exchange Commission (SEC) over better regulations for cryptocurrency. Livingston said: “We all know [crypto] is the next mega-trend of technology and by always having […]

Fierce price action in the last 24 hours could not sustain the bullish momentum as Bitcoin price found a slippery slope in the last two hours, to shed 3% of its price to arrive at its current 24-hour low of USD 8,468 (5:50am UTC, CoinDesk). Previous support levels at USD 8,600 completely gave way as […]

Finance Magnates has reported that Wall Street banking giant JP Morgan will be developing privacy features for its native blockchain transactions, and will likely add that to Quorum. This is only the latest development in the blockchain ambitions of a bank that also launched its own native cryptocurrency dubbed JPM Coin in February, professed to […]